Atlantic Gold Corp (TSX-V: AGB; OTC: SPVEF), a name I own and have been following for over two years, is in a good position and possibly at a turning point over the coming year. I will lay out my thesis in the ensuing paragraphs. As most of you may know, my preference in mining investing is taking positions in gold miners that are somewhat agnostic to the price of gold and that are junior mining companies with the potential to cross-over into intermediate/mid-tier status. This guideline implies production growth while managing costs and having prospective exploration assets that will ultimately lead to increasing reserves net of depletion. But I also require the valuation to be aligned with the risk reward of the opportunity and management having some skin in the game with a strong management team and bench to round out the proposition. I realize this limits the universe of mining opportunities at any given time, which is fine by me because I’ll just trade the rest of the universe based on the prevailing gold price environment at such time.

So why Atlantic and why now? For full disclosure, I have owned Atlantic since late 2017. Since that time, the stock price has been treading water in a range between $1.40 CAD and $1.99 CAD. So far, what we have seen is a massive consolidation of a huge run that began in 2016, that I did not participate in 😂.

Atlantic describes themselves as a well-financed, growth-oriented gold development group with a long term strategy to build a mid-tier gold production company focused on manageable, executable projects in mining friendly jurisdictions. The company has a four phased approach to creating value, which can be seen from their recent presentation and shown below. My thesis is predicated on breaking down this phased approach in compartments to derive various assumptions and highlight opportunities.

Phase 1 has gone pretty smoothly, or as well as any startup mine being commissioned can go. The Touquoy Gold Project went into commercial production in March of 2018. Production during the first year of operation exceeded company guidance and it appears that cash costs and AISC will fall in line with guidance when 2018 financials are released in March. For 2019, the company is guiding higher production of 92-98K oz with a similar cost / AISC profile. At this point, most aspects of the operation is performing better than initial design and that is expected to continue based on these 2019 projections.

Phase 2 is the staged integration of 2 additional satellite deposits, Fifteen Mile Stream and Cochrane Hill. These two deposits fall within the 45km strike length that the Touquoy deposit and Beaver Dam deposit sit on. This phase is the basis of the updated Life of Mine Plan (LOM) that was published by the company in January of 2018. The incremental post-tax NPV5% of C$188M was derived by adding these two assets to the existing profile using a Gold price of $1300 US and at an exchange rate of .80 USD/CAD. Thus the total NPV5% of all the projects combined was increased to C$422M using the same assumptions, the result of which ascribed a 35% post-tax IRR. The LOM and economics of Phase 1 and Phase 2 are listed below.

Atlantic closed on Friday at C$1.73. With 237 million shares outstanding and a fully diluted share count of 251.4 million, the market implies a valuation of C$410M-C$435M. Coincidentally, that valuation range is exactly the mid-point of post-tax NPV5% of C$422 million shown above. It is also the 200 day moving average. Sheesh talk about market efficiency. But what about Phase 3 or Phase 4? Is that priced in? Herein lies the opportunity / re-rate potential.

Phase 3 is the portion of the operating plan where Atlantic is looking to expand reserves and resources at Touquoy, Fifteen Mile Stream, and Cochrane Hill. The Phase 2 LOM plan that was published in January 2018 and was the basis of the production profile and economics indicated above, incorporated drilling up to the summer of 2017. Since that time, through the end of 2018, Atlantic has done roughly 100km of drilling. I believe that the culmination of this drilling activity could not only transition existing resources to M&I categories but given they have extended mineralization at both Fifteen Mile Stream and Cochrane Hill, could add meaningful incremental reserve / resource accretion. The two snapshots below are from their most recent presentation. They illustrate the extensions at Hudson, Plenty, and Egerton-MacLean at Fifteen Mile Stream as well as the extensions of mineralization at Cochrane Hill. The orange area border is the extent of their current Phase 2 LOM plan M&I. The areas extended beyond that will be incorporated into a new LOM plan which should be out sometime in Q12019, my guess being on or around PDAC. 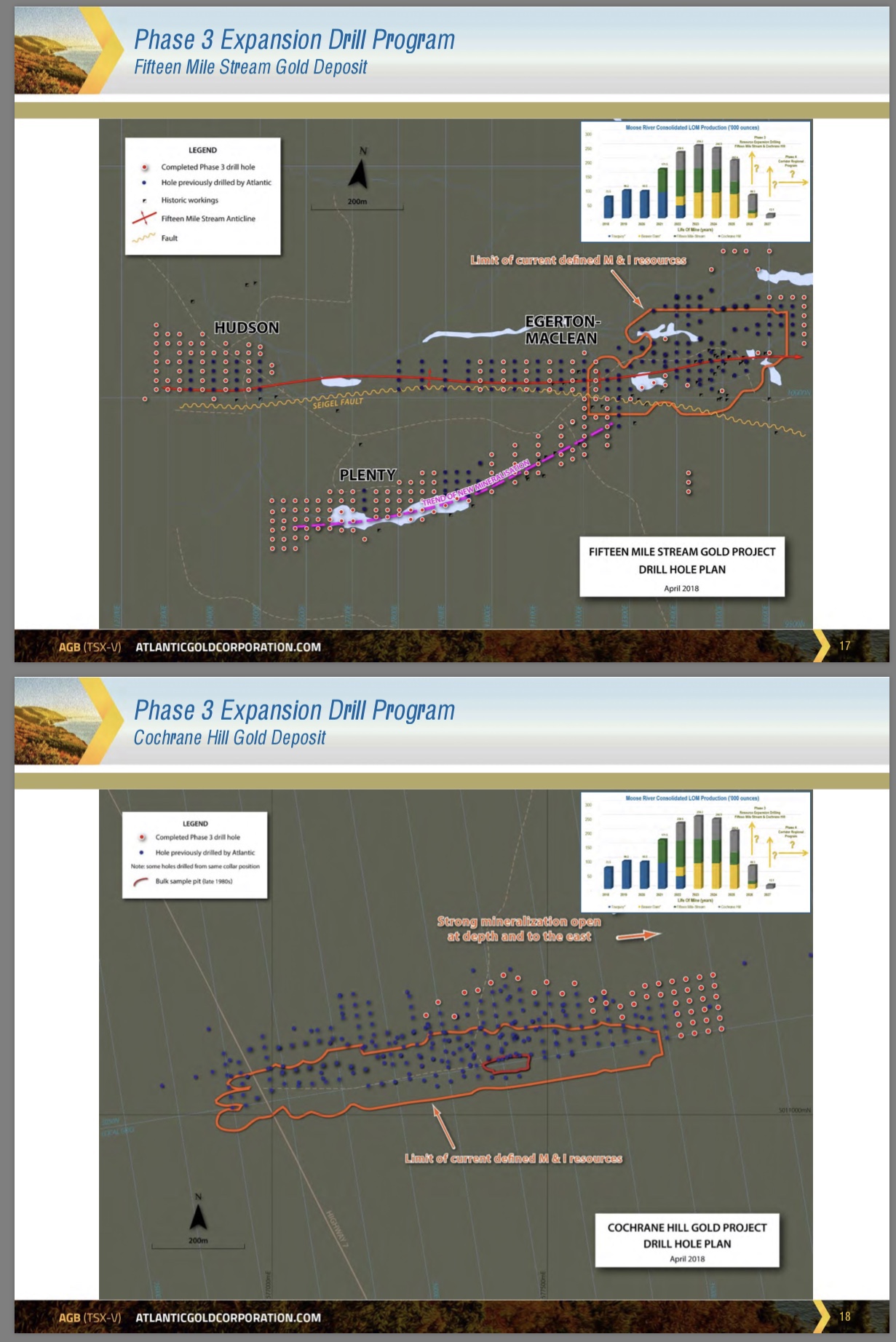 What does this all mean? Well for one, management has made no secret about saying this could increase implied mine life. The updated LOM in other words could add incremental value that the market is not pricing in to the overall economics of the Moose River Consolidated package. How much value remains to be seen but the market at this point hasn’t noticed. Here’s a snapshot of the current Phase 2 LOM. At present, the LOM indicates 4 years of greater than 200k ounces. I believe it is conceivable, based on the amount of drilling done since the last LOM update and the fact the further exploration potential remains, that production profile could increase to 7+ years of 200k ounces with a mine life beyond 10+ years when the new LOM is released. I guess we will have to wait and see what happens.

Phase 4 involves systematically exploring the 45km corridor package along strike that Atlantic controls. As mentioned earlier, this “string of pearls” is host to the 4 deposits that they have today — Touquoy, Beaver, Fifteen, and Cochrane. Management has alluded to the idea of finding another 3-5 pits along that strike. Last year, Atlantic began exploring this area. On its first attempt, it discovered 149 Prospect. After continuously drilling it for the past 6 months, they are now comfortable calling it 149 Gold Deposit. Given its close proximity to Fifteen Mile Stream, only about 1km away, this deposit should at the very least compliment FMS by adding ounces, reducing capital intensity of FMS and increasing FMS LOM. So far mineralization has been extended to about 500m strike with average grades very similar to FMS. This means it could have similar economics to FMS.

While Phase 4 development is early, the quick success Atlantic has had to date does give credence to the theory that there are more pits to find along this untested territory they control. A maiden resource on 149 Deposit will be provided to the market in Q12019.

Conclusion: Based on current valuations, Atlantic is trading at full realization of successful Phase 1 and Phase 2 integration execution. If there was limited potential beyond those phases, I could certainly make the case that valuation is fully realized. However, the potential for a re-rating falls within Phase 3 and 4. We know based upon the 100km of drilling done since the last LOM update within Phase 3 could add meaningful ounces therefore creating incremental value beyond what is priced today. We also know that within Phase 4 they have already found another pit at first attempt. While it is difficult to discern how much incremental value a new pit discovery could add, we can agree that any new discovery is positive and accretive. You could also plug in a price per ounce of reserves at each potential discovery and come up with figures that are compelling even if $100 per ounce is used.

Aside from these compelling factors, Atlantic is one of the lowest cost operators, has been delivering on expectations to date, and has an enviable land package in Canada that will be sure to draw acquisition interest given the M&A environment we find ourselves in today. The successful execution of their strategy would cross them over right into mid-tier/intermediate classification and create the platform for the stock to trade at a premium to NAV and peers.

There are always risks to consider and those cannot be overlooked. But as Warren Buffett says, who incidentally is not a fan of Gold, “Price is what you pay, value is what you get.”

Comment or write on any feedback, critical or otherwise.

http://www.atlanticgoldcorporation.com and all exploration press releases on drilling since summer of 2017.

I own the stock. Therefore, I have an inherent bias.

I am not a certified investment professional. Assume everything I say herein is wrong. I am wrong more often than right. Do your own due diligence and consult with your own investment advisor. Do not buy or sell on anything contained herein.

The content contained herein is strictly my opinion only. I do not warrant to the accuracy of the content or whether this is a suitable investment and disclaim any responsibility.