NightHawk Gold Corp (TSX:NHK) is a company I wrote about a few weeks back in my list of mining companies I am watching as Gold breaks $1400: Link Here.

It’s an intriguing proposition because of the potential for resource growth offered. Colomac at present has a 2.6m oz resource at 1.62gpt. It is expected once the 2019 drilling campaign is completed that the updated resource will sport over 3m oz.

Momentum has increased since the company released its best ever intercept to date back in late May Best Intercepts To Date. This opened up the potential for Zone 1.5 being a high grade shoot.

Zone 2.0, which was the site of a prior open pit mine and is the widest section of the sill as well as it containing the largest component of the current resource, exhibited further potential for high grade resources with the recently announced update in June. This update, in conjunction with others, underscored the potential for additional high grade shoots within several zones Press Release.

There are numerous targets for the company to explore and this year will be their most aggressive exploration campaign to date. The property remains largely under-explored and will need to demonstrate further evidence of these high grade zones to further enhance the mineral endowment.

Speaking of aggressive, Northfield Capital Corporation, Robert Cudney, has been fairly active buying the stock. Their position has increased by 20% since March 31, 2019 to 42.2M shares from 35M. Since the beginning of the year, the position has gone from 30.9M shares to 42.2M shares with 7M of that increase coming from open market purchases while the remainder coming from a bought deal financing closed in May. This has taken Northfield Capital’s ownership position to 19% from 16% at year end 2018.

The combination of: (1) high(er) grade exploration success in conjunction with (2) a consistent steady stream of buying from insiders and Northfield Capital this year has given the stock some momentum. When you overlay that with (3) this being the most aggressive exploration campaign and (4) the company being fully funded to continue doing so, is why I am watching this story very closely as things unfold. 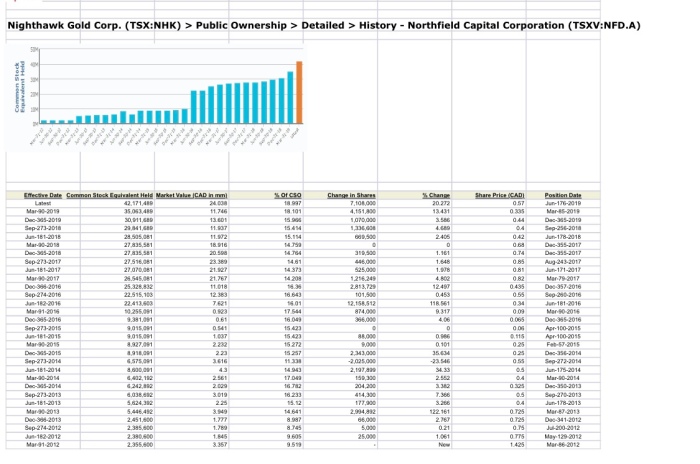 One thought on “NightHawk Gold and Northfield Capital Corporation”